Contesting a Will:
What You Need to Know

During the probate process—the court procedure which determines whether a will is valid—someone with an interest in the will may want to dispute the validity of the will. Contesting a will is usually based on a person’s belief that the will in question is not authentic, or something improper happened when it was drafted and/or signed. The procedure and requirements for will contests is detailed in several sections of the California Probate Code, the body of laws which governs the distribution of a deceased person’s assets to their heirs.

Common reasons for contesting a will 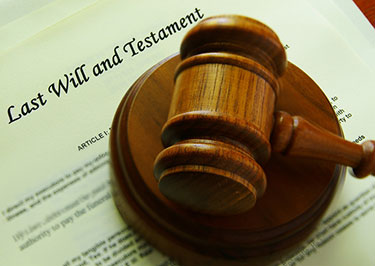 Wills are generally presumed valid if they meet minimum requirements defined in Cal. Probate Code §§ 6110 – 6113, such as bearing the signature of the person making the will (the “testator”), and the signatures of two disinterested witnesses. Contrary to popular belief, in California, a will does not have to be notarized.

When someone (the “objector”) decides to challenge a will, they must have valid grounds for the contest. The burden of proof rests with the objector to provide legally valid evidence to justify a court of law setting the will aside. There are four primary reasons that may justify rendering a will invalid.

First, if the objector can prove that the testator was suffering from some type of serious mental incapacity, the will may be set aside. To support such allegations, evidence must include disinterested witness statements, physician testimony, medical records, or other substantial evidence. The opinions of family members who stand to benefit if the will is set aside generally will not be credible evidence in the view of the probate court.

Second, if the objector can prove that someone else applied excessive pressure (undue influence) upon the testator to sign the will, or it was signed under duress, the probate court may set it aside. The definition of undue influence under the law is complex, but it is generally regarded as a form of pressure which the testator is unable to resist and is sufficient to overcome the testator’s free will. The elements of duress are clearer; it involves threats to the testator which they had reason to fear.

The third possibility is fraud, which may occur if the testator signed the will without knowing what the document was, lacking understanding of its meaning, or based on false information provided to the testator. However, while the objector might be absolutely certain that the testator was defrauded, the court is only concerned with verifiable evidence of fraud, which is often difficult to obtain.

Finally, if the objector can prove that the will was not properly executed per state law—such as lacking the signatures of two disinterested witnesses—the will may be set aside.

Who can contest a will?

In California, only interested parties may contest a will. Interested parties can include unnamed heirs, recipients named in the will (“beneficiaries”), persons who would have benefitted under an earlier will, spouses, children, creditors, or anyone else with a legitimate financial interest in the testator’s estate.

The interested party may appear before the court and file an objection either orally or in written form. The court retains the discretion whether to hear and respond to the objection or to grant a continuance for the objector to file a written objection.

When can an objection to a will be filed?

A person who wants to contest a will must do so before or during the first probate hearing for the will. After a person files an objection to the will, the executor named in the will and any alternate executors, all known heirs, and each party named in the will must be formally notified. The notified parties have 30 days to respond to the objection if they want their input to be considered by the probate court judge.

Do you have questions about contesting a will, probate, and related matters? Contact Probate Attorney Barbara Craig to schedule a free consultation. Serving clients in the South Bay area including San Pedro, Torrance, Lomita, Harbor City, Carson, Wilmington, Long Beach and other nearby communities.